The Covid-19 pandemic may mark the start of a new global economic, political and cultural supercycle, the sixth in the last 160 years, and one which ushers in a more tumultuous period of history, where the retreat of the globalisation of the past four decades could also unlock more volatile and structurally higher inflation, leading economic commentators from Germany and Italy’s largest banks, the Dutch statistics agency and AXA Investment Managers debated at a recent AXA IM online media roundtable.

“There are these broader, bigger-picture, sweeping cycles which are the major influences on what happens in politics, asset prices and our way of life. We’ve identified five through history and we think that we’re close to a turning point for a new era,” Jim Reid, Global Head of Fundamental Credit Strategy at Deutsche Bank and author of the research paper: ‘The Age of Disorder,’ said.

The high-inflation supercycle of the 1970s fundamentally stemmed from a demographic shortage of labour, allowing greater unionization, with wages comprising a high share of GDP relative to corporate profits, as well as the oil market price shocks of the period, Reid noted. Around 1980, demographics improved but, more importantly, China began to integrate itself into the global economy and many different barriers to trade were broken down across the world. That turning point ignited a great surge in the number of workers available globally that has lasted until the present day.

“China effectively dumped a billion cheap workers on the global economy over a few decades, which meant increasingly wages were put under downward pressure and inflation was reduced. Globalisation meant more trade, and suddenly inflation is not a problem anymore; it’s handled externally. So, I believe central banks haven’t necessarily controlled inflation over the last two or three decades; I reckon globalisation and demographics have,” Reid said.

He added that with globalisation appearing to be going into retreat, highlighted by the geopolitical tensions and trade war between the U.S. and China, and demographics deteriorating as populations get older, there is now an opportunity for labour to gain more of a share of the wealth pie, relative to capital, and also a likely reversal in the low inflation of the past 40 years. Reid is a proponent of Modern Monetary Theory (MMT), an alternative to mainstream macroeconomic theory, which argues that governments create new money by using fiscal policy. According to advocates of MMT, the primary risk once the economy reaches full employment is inflation, which can be addressed by gathering taxes to reduce the spending capacity of the private sector.

“The economic orthodoxy post-Global Financial Crisis was very much relatively tight fiscal, even if your monetary policy was very loose. (This was) a near liquidity trap where monetary policy inflated asset prices, but very little of it got into the real economy because of the relative austerity of governments. I think all of us are now realising you can run with a lot, lot, higher levels of debt than anybody imagined a decade ago, because central banks had seemingly unlimited willingness to buy government debt. Economic orthodoxy was slowly being questioned before Covid-19, but the (pandemic) shock, and all the necessary government spending that has brought, moves us closer to an MMT-style of world permanently, not just for a brief period after coronavirus. So, governments will spend more this decade. Central banks will still be printing a lot of money, and you move closer to helicopter money and MMT, which I think is inflationary,” Reid said.
He added he wouldn’t go as far as former Goldman Sachs chief economist Gavyn Davies in describing as a “watershed event” the U.S. Federal Reserve’s announcement in August it was moving to a new economic framework for U.S. economic policy’ that shifts to average inflation targeting and emphasises employment. Reid said it would only represent an inflationary ‘tipping point’ if governments buy into the Fed’s resetting of priorities.

“Rather than a watershed event, it (the Fed’s policy shift), has the potential to be one of those ‘butterfly flaps its wings’ events in one part of the world that causes a hurricane further down the line…it’s an important move, but for it to be inflationary going forward, I still think you need governments to buy into it. Increasingly in the last few years, the central banks have given the keys of the helicopter to governments and said: here you go, you fly the helicopter and so far, governments have been reluctant to fire up the ignition,” Reid concluded.

Marco Valli, Chief European Economist at UniCredit, told journalists that the Fed hadn’t been able to push U.S. inflation towards its 2.0% target even when the economy was ‘running hot’, so it was unlikely to do better with the large economic output gap that has opened up due to demand shock from the pandemic, unless there is synchronised action with fiscal policy.

The Fed’s dovish policy stance has put pressure on the dollar, boosting the relative value of the euro and putting further pressure on the European Central Bank to do more to support the eurozone’s coronavirus-hit economy. Valli said he wouldn’t be surprised if the ECB was forced to expand its Pandemic Emergency Purchase Programme (PEPP) asset buying by an additional €500 billion in December. The Fed’s move could also have a strong ‘knock-on effect’ on the ECB’s approach to how it defines price stability, he added.

But Valli said there was a very low likelihood of inflationary pressures emerging in the eurozone at least until the economy returns to pre-crisis levels of activity, which UniCredit doesn’t forecast until the end of 2022.

“The ECB is effectively doing yield-curve control. Allowing governments to spend as much as they need to close the output gap and forcing investors out of safe assets into riskier assets in the hope that they will kickstart a positive economic cycle,” he said.
While the longer-term emergence of structural labour shortages due to ageing demographics and retreating globalisation could emerge after the Covid-19 crisis passes, Valli was neutral over whether this would ignite inflation, because these factors could equally be offset by the growing automation of economies suppressing wage rises.

“Governments will have a really difficult mission in trying to preserve employment levels in the wake of a wave of automation, which I think the Covid crisis will intensify. It’s a tug-of-war between fading labour supply and demographic factors on the one hand and quickly advancing automation on the other,” he concluded. 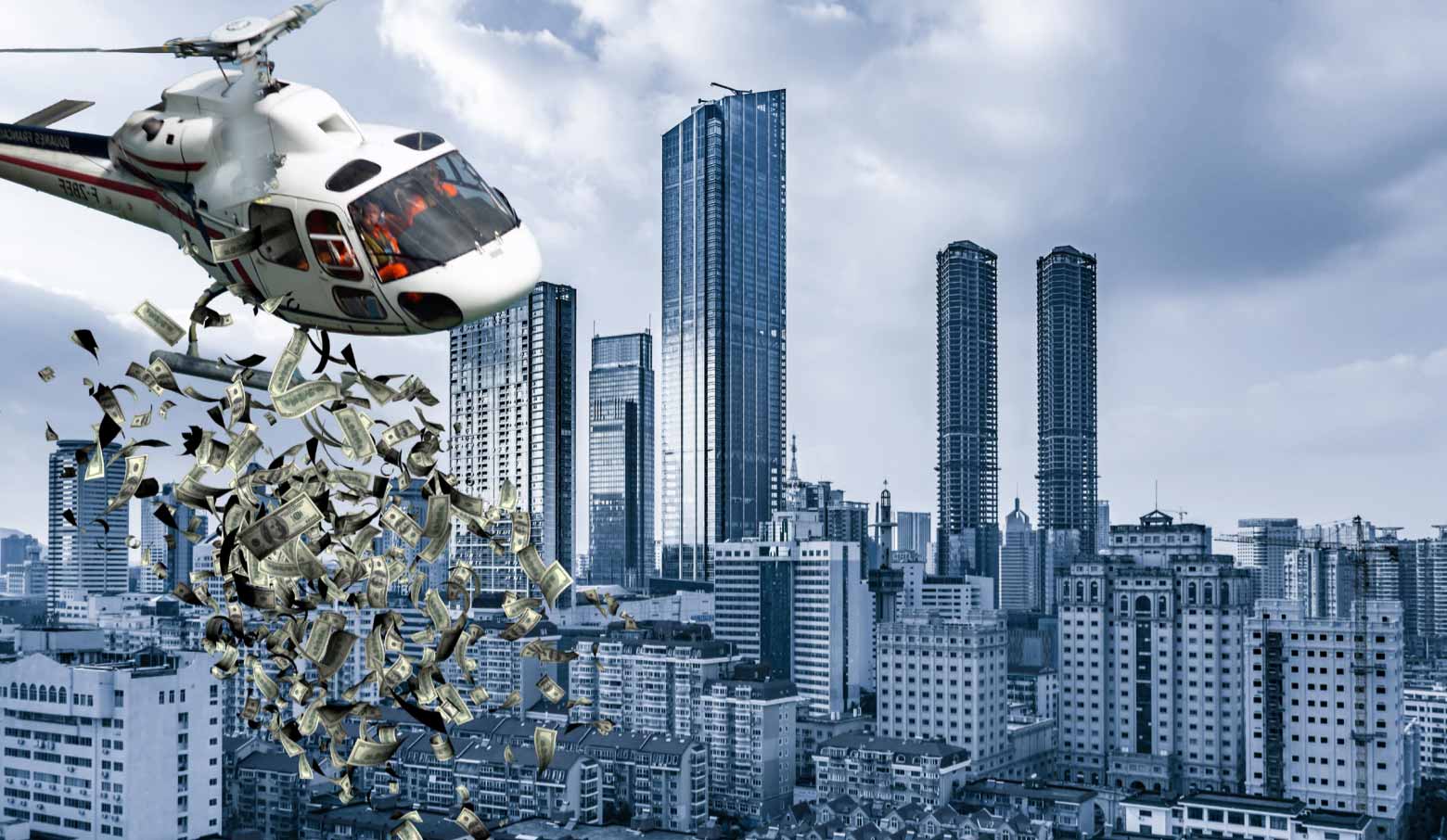 The pandemic-triggered recession represents a ‘deflationary shock’ in the general consensus of economists, which is borne out by the data, with the eurozone registering the second consecutive month of deflation in September, but what economists expect and how markets react to seismic events, can be quite different things, Jonathan Baltora, Head of Sovereign, Inflation and FX, at AXA IM said.

“What is interesting with inflation is that it is very difficult to forecast properly over a long period of time. So, making forecasts over six to 12 months is fairly doable, but making accurate inflation forecasts over the longer term is extremely difficult…If we enter a new phase in the global economy and trade is (thrown) into disorder, that is something which has the potential to seriously disrupt inflation trends. If you see more localisation, less globalisation, that is definitely the kind of shock that would spur inflation. We’re not there yet, but the risks are greater than they’ve ever been in the past 30 years,” he said.

Market inflation expectations have already rebounded aggressively, due to the robust recovery, so far, in underlying economic activity. The consensus of economists’ long-term inflation forecasts for the eurozone are 1.3%, which is higher than projected for 2021.
Baltora said it was no longer cheap to hedge for inflation next year, but it was relatively inexpensive to hedge over the longer term. Investors are happy to do so because they are not only hedging the ‘level’ of inflation, but also its ‘volatility.’

“Due to social confinement (in the pandemic), inflation has been dropping, but prices are rising quite aggressively in some areas. If you look at the U.S., the decline in inflation was the biggest on record for the past 30 years and the rebound has also been the biggest in 30 years. And this is telling you something. When you get confinement periods you cannot go out and spend, and when you do go out and spend, you spend big. There are some shortages in stores like we’ve never seen in the past decade and that means prices can be increased. So, inflation volatility is increasing as well and that means potentially interest rate volatility, which a lot of people are looking into at the moment.

The AXA IM analyst said there aren’t a lot of options when it comes to hedging inflation and his asset of choice would be inflation-linked bonds, because investors receive the coupon, or income, that is linked to inflation and from a long-term perspective the instruments have an attractive valuation.

“A lot of Dutch pension funds are doing something relatively smart, which is to buy long-term infla tion-linked bonds so they can basically kill two birds with one stone: you can hedge your duration and your inflation exposure at the same time, and you could also reduce the volatility of the asset side of your bal ance sheet,” he added.

“I believe we are in an era of fiscal dominance, so when inflation strikes central banks will not have the means to respond. They should increase interest rates and will not be able to do so, because that would put debt sustainability for some sovereigns across mature economies at risk….We’re not at the stage where inflation is going to blow through the roof, there is no rush, but this is definitely the direction of travel — to increase inflation protection. From a valuation perspective, it is in our view, relatively inexpensive to do so, and the steepness of the yield curve means you’re still earning more interest than at the short end of the curve than in nominal bonds,” Baltora concluded.

Dutch inflation, as measured by the ECB’s Harmonised Index of Consumer Prices (HICP), has run a bit faster than in the entire eurozone over the last 25 years, but the mean price level in the Netherlands is more or less comparable with the average in the EU, so price levels in the country are fairly low compared with oth er rich member states like France, Germany and the Scandinavian countries, Peter Hein van Mulligen, Chief Economist at Statistics Netherlands told the AXA IM Roundtable.

You might not appreciate that fact though, if you are a recent arrival in a city like Amsterdam struggling to find an affordable rental apartment or trying to get onto the owner-occupier housing ladder. Years of ultra-low interest rates have spurred surging residential prices and rents in urban centres where the supply of homes lags far behind demand.

Housing costs, mortgage and rents, make up the largest component of the Dutch national Consumer Price Index (only rents are included in the European HICP) and are currently at the highest proportion of the CPI, at about 21%, since the mid-1990s, Van Mulligen noted.

“The CPI is the average share of total expenditure of all people living in the Netherlands. So, this may be higher (for housing costs) if your income is lower, and if you live in a populous city like Amsterdam, where rents and also house prices tend to be a lot higher than in the rest of the country. But if your income is big ger, or if you live in less crowded areas, the share of your total expenditure for housing is lower. So, the 21% in total, rents and owner-occupied housing, is an average for the entire population. But, yes, this means that for some parts of the population, actual inflation may be higher than for the average population,” he said.