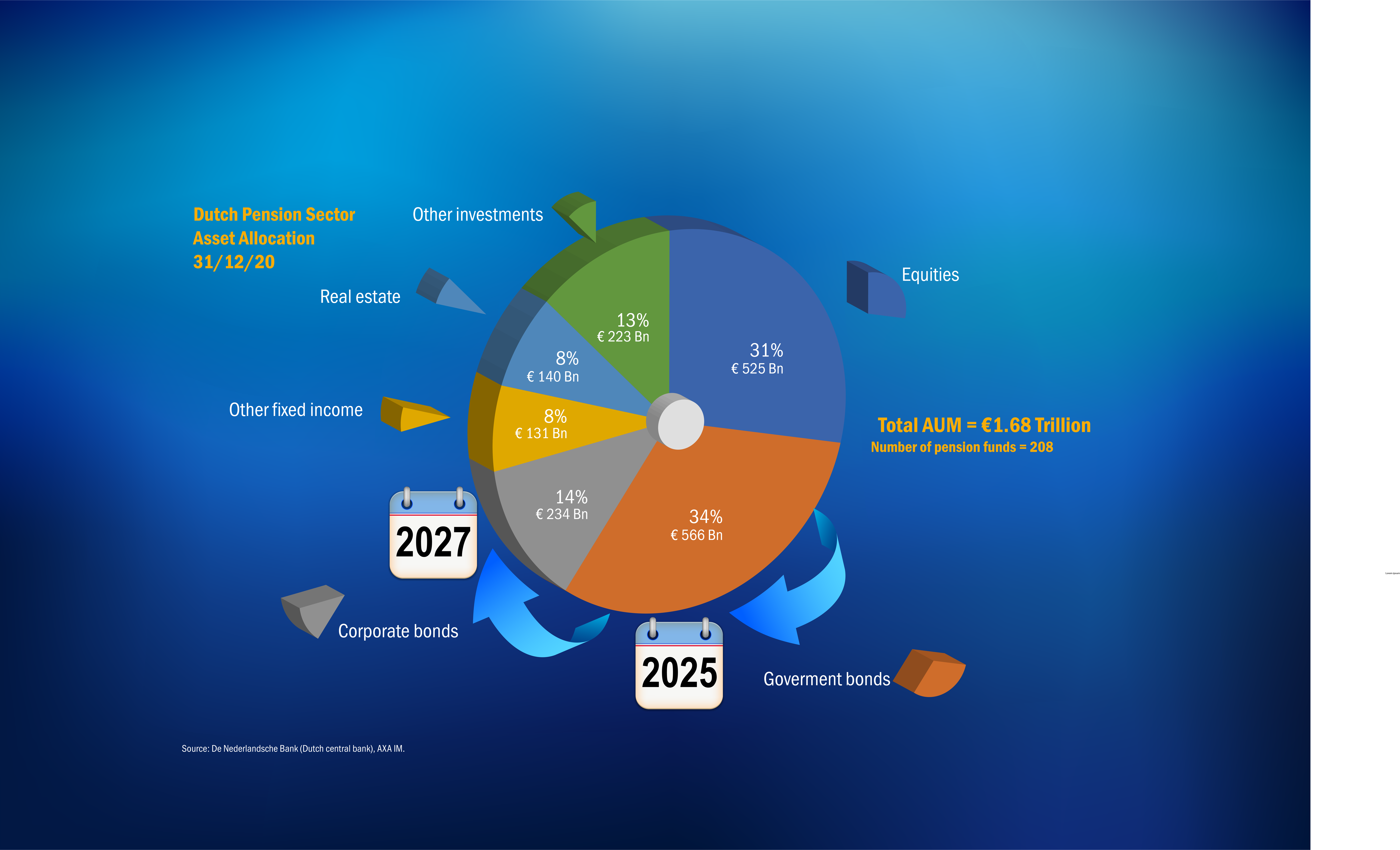 “The Dutch pension industry is the fourth largest in the world and it is about to become a €1.7 trillion building site, moving from a regulatory-driven framework in the Great Rotation to an economically-driven one. The pension funds will shift from defined benefit to defined contribution structures and naturally, because today they’re in DB schemes in a regulatory -based system, a large part of that portfolio, roughly €560 billion, is being allocated to government bonds, with a much smaller proportion (€230 billion) allocated to credit bonds. Going forward, we expect that allocation to sovereign debt to halve — and to credits to double — with the transition to an economic system,” Hanneke Veringa, Country Manager Netherlands, for AXA IM told journalists.

“The Dutch pensions system today is between a rock and a hard place. The pension funds are struggling to cover their regulatory funding levels, but only have a couple of levers to play with. They can increase pension premiums for members, but that’s difficult in the current economic situation, or they can increase their risk profile, but that’s impossible under the present regulations. With the outlook for returns at a strategic level deteriorating, they’ve used the final lever available to them, which is to change the rules. The pension funds are being very ambitious in their plans to adopt the new regulations and they’re doing it in an incredibly speedy fashion,” she added. 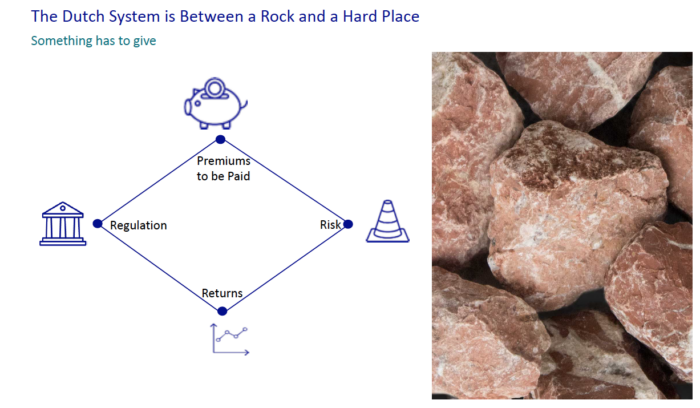 Figure 1: Between a Rock and a Hard Place: Balancing Regulation, Risk, Return and Premiums to be paid

AXA IM believes that possibly as much as €300 billion in Dutch institutional capital could rotate between the two fixed income asset classes based on a comparison with the current asset allocation in the UK’s pensions industry, which underwent a similar DB to DC scheme transition. UK pension funds’ allocations to corporate bonds are on average nearly twice as high as for the Dutch and they also have significantly lower exposure to government bonds than institutional investors in the Netherlands. 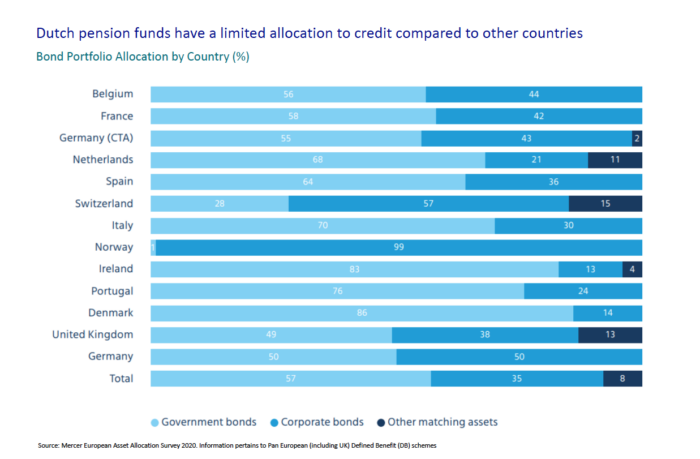 “I think the UK offers a good guide to what may occur in the Netherlands. With the maturing of defined benefit schemes and many going into a ‘runoff mode,’ there’s been a shift out of traditional LDI-type (liability-driven investments) strategies into cashflow-driven investment strategies where the use of credits is much more extensive. A switch away from government bonds and swaps into credit to match future pension-related cashflows. That’s created a huge demand for long dated, good quality corporate bonds and the supply has responded,” Chris Iggo, CIO Core Investments at AXA IM, said.

Hanneke Veringa said the key date for the Dutch pension reforms, where implementation has recently been pushed back from 2026 to 2027 — at the latest — to give the retirement schemes more time to restructure their portfolios, is expected to be two years beforehand on January 1st, 2025 by which time the pension funds need to have come to an agreement with their stakeholders, trustees and retirement plan members, on how they are planning to proceed. That agreement then has to be presented to the Dutch pensions regulator, the central bank (DNB) — realistically leaving the funds with just under two years to put their transition investment portfolios into place, she concluded. 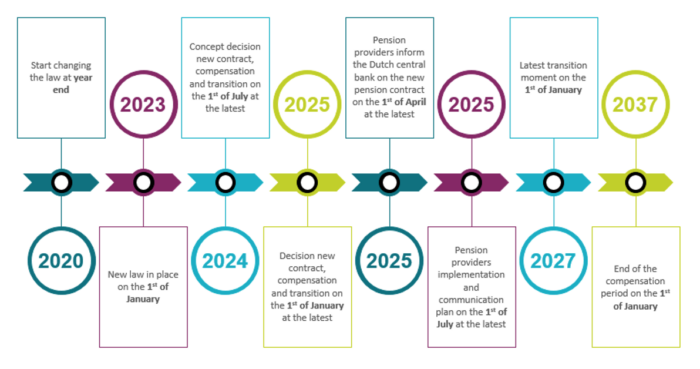 During the transition period the pension funds will be obliged to maintain a 95% funding ratio, which will present a challenge when many schemes, including the two largest, ABP, the civil servants pension fund, and PFZW, the health workers retirement plan, together accounting for around 40% of total Dutch institutional assets under management, are operating below this level.

“Under a DC system the projected investment returns are going to be the new yardstick for the pension funds and if they’re unable to attain this benchmark then there will be direct monetary consequences, more or less straightaway, for their members. We expect that this will result in an asset allocation where there’s a certain degree of certainty about the cash returns that are going to be achieved. A super important element of this will be that there’s clarity about the risk preferences of all the participants in the pension fund,” Veringa said.

She questioned whether it made sense against this background for the pension funds to maintain their high allocations to very long duration government bonds of 20, 30 or even 50 years. There is also likely to be hesitation on the part of these investors to committing to illiquid alternative investment asset classes when the proposed restructuring of their portfolios is probably going to need to be acted on within three years, depending on the final detail of recent adjustments to the timeline for the reforms.

“AAA Euro government bonds are actually sponsored today in the current regulatory set-up, in the sense that if you, as a pension fund, invest in this sovereign debt, there’s no capital buffer required. We expect that once this sponsor’s support is removed, that this will be an area where restructuring may take place. In terms of where the current investment allocations will be redirected, we believe assets where a stable income stream can be generated will be favored. We also expect there will be increasing interest in inflation hedging. Pension funds today tend to have a very mechanical governance process and we would recommend that they start planning quickly, with an eye to building a bit of slack into their processes. Combine reality checks with a little more flexible governance in place in order to be able to move in a good way through this important transition period,” Veringa concluded.

In order to help Dutch pension funds navigate the road to the new DC system and the corresponding Great Rotation within their fixed income portfolios, Hanneke Veringa said AXA IM had launched an easy to understand ‘Bond Performance Barometer’ infographic, which will be published on a quarterly basis together with analytical commentary. The barometer indicates the relative ‘weather,’ or return spread, for institutional investors allocating between government bonds or corporate bonds of the same credit rating.

“There is a better place in terms of destination, which is when you travel to credit bonds and can exchange them like-for-like in duration and in credit rating. Basically the higher the asset swap spread is in credits relative to government bonds the sunnier the place the pension fund will be travelling to in restructuring its portfolio,” Veringa said.

Many Dutch pension funds have high allocations to AAA-rated government bonds because no ‘risk buffer’ is required in holding them, but it is not a great place to be for returns when spread levels are negative and the equivalent AAA corporate bonds, viewed to be exact equivalents from a regulatory/risk perspective to their sovereign debt counterparts, are providing better investment results. Although institutional investors will similarly often opt for a slightly sunnier outlook in lower-rated AA government bonds to boost returns, their AA credit equivalents should also generally produce more positive outcomes. 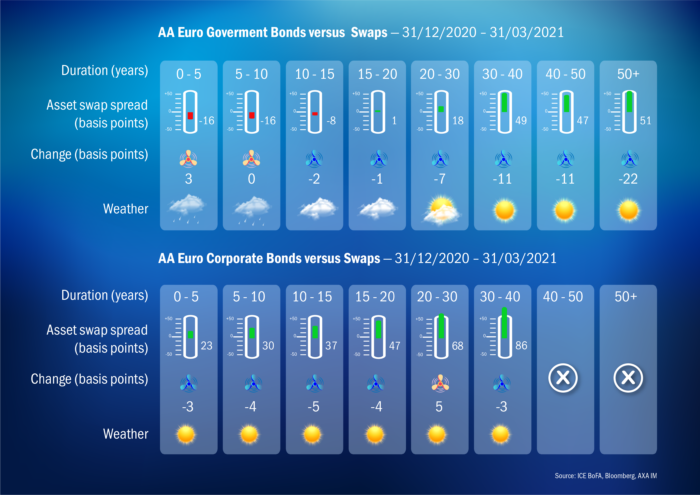 Dutch pension funds account for an estimated 10% of the total face value of outstanding debt in the €6.4 trillion European government bond market, so a €200 to €300 billion overall decline in demand should be absorbable without serious market dislocation, Johann Plé, Senior Portfolio Manager Fixed Income at AXA IM, told the media roundtable.

But he added the impact could be more heavily felt in the steepening of the yield curve in very long-dated sovereign debt maturities where the market is much thinner, at an estimated €400 billion, and the Dutch institutions form a larger proportion of the total investment volume.

On the flip side in the European corporate bonds market, a sharp rise in Dutch institutional capital flows could also be expected to have a significant structural effect.

“The high-rated European corporate bond market is nowhere near as large as for government bonds. For example in AA credits it’s around €200 – €300 billion. The additional potential total Dutch investment in corporate bonds would be equivalent to the entire size of this segment and you would have to consider how other market participants already invested in AA credits would react to this development if you have such a massive amount of additional demand coming in,” Plé noted.

He said he would expect a rotation out of higher grade credits into lower-rated debt as investors looked for better valuations and that corporate issuers would respond with greater supply of bonds at longer durations.

“The corporate issuers will certainly look at this additional demand as an opportunity to finance themselves. You could compare this with the green bond market where we’ve seen huge demand for ESG integration across investment funds from investors trying to get their carbon footprints lower. Everyone saw the strong demand for green bonds and the issuers reacted, even though it represents an additional cost for them to build these ESG frameworks properly. We’ve seen many new sectors and issues come to the market, which has been very impressive and almost unexpected. Where there is demand there will be supply and we will see this acceleration in credits over coming years if the Dutch bond rotation materialises,” Plé concluded.

The 40-year Bull Market in Bonds Draws to a Close

The reconstruction work in Europe’s largest institutional fixed income building site is starting up against the background of the sun setting in the four decades global bull market for bonds, AXA IM’s Chris Iggo told the media roundtable.

“We’ve had a 40-year bull market in fixed income, with bond yields on a declining trend since the early 1980s. The crisis and the interruption of economic activity, saw central banks accelerate and upsize their bond purchases programmes as part of broader support for the global economy in the pandemic and U.S. Treasury yields hit their all-time lows in August last year. European sovereign yields hit their lows a bit later and much of the European market for government bonds was operating with negative yields. The narrative has changed and we might be looking towards higher bond yields in the future, which could suggest a bond bear market, but we can’t be as dramatic as that at this stage. I would say the bull market is definitely over and we are going to be faced with a slow, but definite, normalisation of the interest rate environment and that will be reflected in how bond yields trade,” Iggo said.

He added that the technical impact of institutional investors including structural demand for long-duration assets shouldn’t be underestimated, however, even though the macro picture is pointing towards higher bond yields. 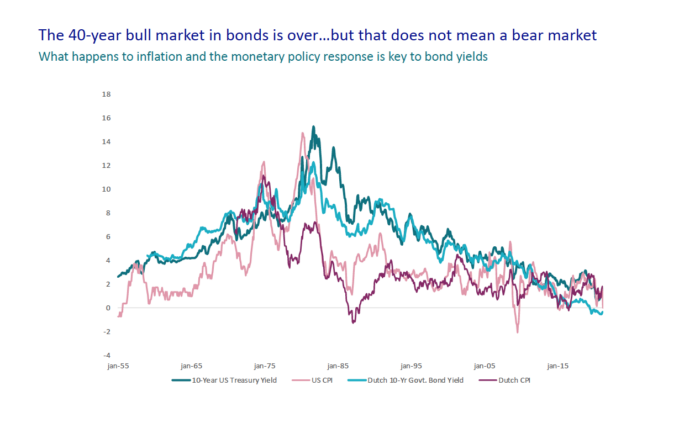 Figure 5: The 40-year bull market in bonds is over, but that does not mean a bear market

The turning point in the fixed income markets came in the fourth quarter of last year with the breakthrough news on the efficacy of the Covid-19 vaccines. The economic outlook subsequently improved, with very strong growth forecasts emerging this year that have also been subject to many upward revisions in recent weeks. By the middle of 2022, AXA IM expects most major economies will have returned to, or surpassed, the level of GDP they were at prior to the crisis at the end of 2019, he added.

The turnaround in economic sentiment has been accompanied by growing concerns about inflation. Energy prices have increased significantly over the last year and the economic recovery also provides companies with more pricing power, which will mechanically flow into stronger annualised rates of inflation, Iggo noted. There is also the impact of Covid-19 on global supply chains, which needs to be taken into account and has been particularly reflected in the shortages and price rises in the global semi-conductor market.

“We’ve seen break-even inflation rates widen in the major inflation-linked bond markets and that’s been associated with a steepening of yield curves as well…but if we look at both the ECB and the U.S. Fed, the message is very clear. Inflation needs to be higher, and persistently higher, than it is at the moment for them to think about withdrawing their monetary support,” Iggo concluded.