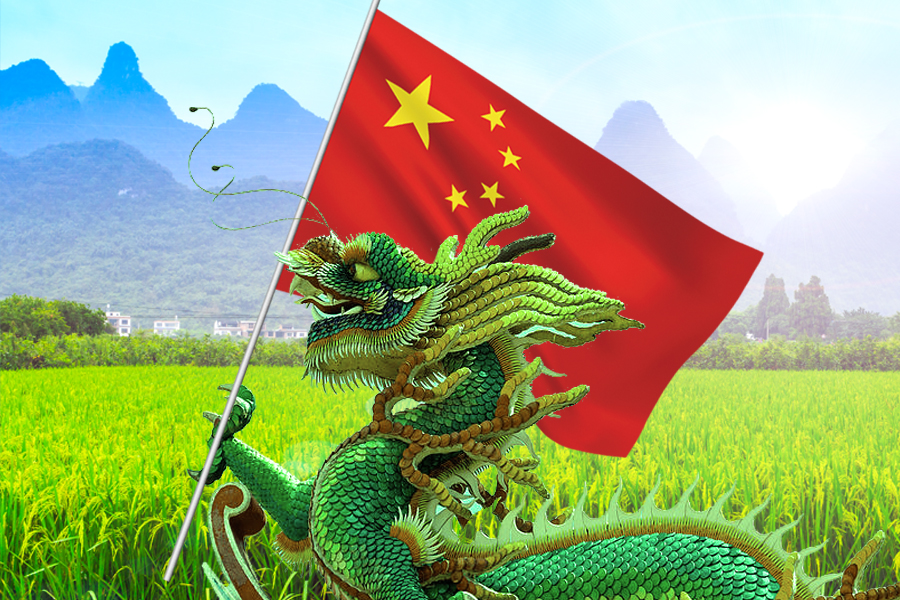 China’s successful early handling of the coronavirus pandemic through strict lockdowns has meant it was the only major economy to grow and not shrink in 2020, expanding its share of the world economy at triple the rate of 2019. The resurgence in economic growth has emboldened the Chinese government to drive forward in throwing open its domestic financial sector to create an irresistible magnet for international investors and establish China as an investment destination to match its status as a world trade powerhouse, while posing a challenge to the U.S. dominance of global capital markets and a dilemma for Europe, speakers at a recent online media roundtable hosted in Amsterdam concluded.

“China-U.S. rivalry will come to dominate financial markets as it does now global trade and European governments and investors will be pushed to resist American efforts to decouple from China, because a strong global economic recovery from Covid-19 requires strong economic cooperation with the Chinese. European institutional investors realise that Chinese markets will continue to offer them very important and increasingly growing opportunities and this will place them between a rock and hard place of the geopolitics of American pressure and the economics of Chinese growth,” Ties Dams, research fellow at the Netherlands Institute of International Relations ‘Clingendael,’ told journalists.

Dams is the co-author of the Clingendael research report: Fire and Haze – Sino-U.S. rivalry, the Covid-19 crisis and financial markets. The Clingendael Institute is a co-founder, along with AXA Investment Managers, of The China Platform for European Institutional Investors, which facilitated the media roundtable and has a particular focus on geopolitics and the dynamic field of Chinese ‘green financing’ and its role  in international efforts to address Global Climate Change.

Dams said that the present U.S.-China rivalry had historical echoes 400 years ago in the 17th Century when the Dutch East India Company or the Vereenigde Oostindische Companie (VOC), the first public listed corporate in the world and also truly global combination of  trading conglomerate and military power, was entangled in a series of conflicts with the Ming Dynasty over the company’s attempts to impose its commercial system on China. A confrontation from the 1620s in which the VOC was ultimately defeated.

Dams said the U.S. stand-off with China did not start with the Trump presidency and harks back to the previous Obama administration’s  ‘pivot to Asia,’ policy which was widely seen by the Chinese as an aggressive and assertive way to contain China and get the U.S.’ allies in the Indo-Pacific to help with that effort:

“Trump and (president-elect) Biden show much continuity and, if anything, Biden will be more of a threat to China than Trump has been. Trump was a deal maker and Biden frames the conflict with China in a rather different way. Trump promised his electorate to get a better deal with China. Biden is talking about a global alliance of democracies to stand up to the Chinese to contain and confront China’s authoritarian advance. This makes it an existential ideological conflict, rather than a deal-making conflict, or a negotiation, and therefore it’s much harder to de-escalate,” he said.

Dams also noted that China had so far shown little motivation to move on crucial trade issues that form the backbone of its conflict with the U.S., and the Chinese are doubling-down on their efforts to become a dominant global player in high tech. More fundamentally, President Xi Jinping has implemented a more assertive foreign policy that assumes a measure of China-U.S. conflict will endure and escalate in decades to come.

For its part, the U.S. has signalled its willingness to use financial instruments to apply pressure on China, adding to the fears of European investors they will be caught in the middle. In May this year, Trump ordered the federal government retirement fund to divest from China, not at his own behest, but following bi-partisan pressure from Congress to do so. In the past week, Trump’s executive order barring Americans from investing in Chinese companies with suspected ties to the country’s military led to investment index provider MSCI removing these firms from its indices.

Dams said of the various scenarios The Clingendael Institute had modelled for U.S.-China rivalry and its implications for European institutional investors in Chinese markets, ranging from ‘mild to bad’ within ‘consolidation and escalation,’ he thought ‘Catch-22’ was most likely: Growing pressure from the U.S. and growing opportunities in China causing huge dilemmas for the Europeans.

China’s effective containment of the coronavirus domestically will shape the country’s economic outlook for 2021-2022 and reviving growth in the ‘natural economy’ will take over from policy easing as the main driving factor in a return to pre-pandemic “normality,” with any lingering impact from Covid-19 likely to come from offshore, Aidan Yao, senior economist China at AXA Investment Managers told the media roundtable.

“There has been a very significant rebound in economic activity. We have essentially returned back to pre-Covid levels. By any measure, that it is a pretty impressive performance, but beneath the headline number is a pretty uneven recovery across the different parts of the Chinese economy. On the one hand, you have industrial production and exports staging a very strong economic rebound and on the other you’ve got consumer spending, retail sales, lagging behind, although this has accelerated in the last couple of months. This is a multi-speed economic recovery, which I think is going to make Beijing more cautious. We expect economic policies to normalise, but that this will be quite data dependent,” Yao said.

AXA IM forecasts Chinese GDP growth of 8.0% in 2021, compared with 2.3% in 2020, which is magnified by the year-on-year rebound from this year’s pandemic-depressed base. 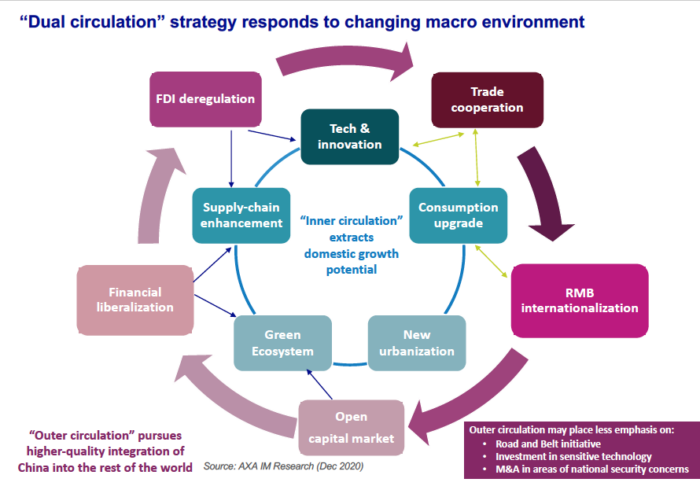 From 2021, Chinese geopolitical, economic and financial market policies are likely to be strongly influenced by two major strategic plans that Beijing has announced in recent weeks; the 14th five-year plan and a longer-term plan that takes China all the way to 2035. There are four major objectives to these plans summarised in the so-called ‘Dual Circulation’ response to the changing macro environment: