Bellier Financial has a successful track record of over a decade in advising major investment management, real estate and financial services companies in all aspects of public relations.

Our team draws on a wealth of experience from journalism, law and private equity to demystify business and finance so that clients are able to communicate simply and with clarity to the media and the market.

Why companies select Bellier for their public relations and communications requirements

Bellier Financial was featured in the 10 year anniversary edition of PropertyEU magazine. 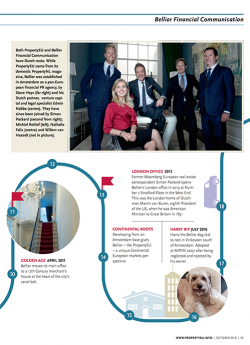 “Tristan Capital Partners has had a long and fruitful relationship with Bellier Financial Communication. Bellier’s marketing and messaging skills have helped us to sculpt Tristan’s narrative of growth and investment performance in the European real estate market for the media and contributed strongly to the growth of our brand and the success of our company.”

Bellier – the Ram by the Dam, or the French spelling mistake company

Bellier takes its name from the French translation of the astrological sign of Aries, or ‘the Ram,’ of one of its two co-founders — Steve Hays. In French it also refers to a ‘battering ram,’ used to break down the gates of fortresses.

We like to think of ourselves as breaking down pro-forma approaches to public relations with a more journalistic-style of storytelling for our clients.

The French ‘Belier’ is spelt with one ‘L’, but when Bellier was registered at the Dutch Chamber of Commerce in Amsterdam in 2005, it was mistakingly spelled with two ‘LLs.’ Despite our passion for accuracy, we kinda of liked the name’s chic look and sound in English, French and Dutch (though not with a hard Amsterdam accent….), so decided to keep it.

The Bellier logo is written in 17th Century printer typescript from Amsterdam during the Dutch ‘Golden Age,’ when the canal house accommodating our offices was built on the Singel, close to the Dam square at the heart of the city. Hence the “Ram by the Dam.”