Delft/Bend, Oregon – Hospitals in the Netherlands are to give thousands of medical instruments a fresh lease of life in Ethiopia and fill an urgent need for children and adult patients suffering from crippling diseases and wounds, after the Dutch-American Reach Another Foundation (RAF) spotted an opportunity to find an alternative use for a vast array of perfectly viable equipment that would otherwise have become redundant under new EU regulatory standards.

RAF has named the initiative ‘Project Lazarus’ after the miracle recounted in the Gospel of John in the New Testament, where Jesus raised Lazarus of Bethany from the dead four days after his entombment.

Marinus Koning, RAF founder, said: “Good tools are half the work and we were told stories by newly graduated neurosurgeons at medical centres in Ethiopia that they could not perform surgery at all because of a lack of instruments. They were moved to tears when we gave them a set of just 20, because it made it possible for them to start applying their skills with patients. When we heard about the new European regulations, we immediately realized the tremendous opportunity we had to meet a huge need in Ethiopia for everything from surgical scissors, needle holders, retractors, forceps and chisels, to basic sutures.”

Marinus Koning and his twin brother Jan, based respectively in Bend, Oregon in the U.S. and Delft, South Holland, are both former surgeons and co-founders of the Reach Another Foundation, which are supported by major donors including the AFAS software company and the John de Mol Talpa Network in the Netherlands. Dick and Jan received Dutch knighthoods at the end of 2018 for their pioneering work in supporting the establishment of neurological centres of excellence in Ethiopia to treat the thousands of babies born with hydrocephalus (water on the brain) and spina bifida in the country, who would otherwise almost certainly have died.

Two Dutch hospitals, the Reinier de Graaf Gasthuis in Delft and the Ruwaard van Putten Ziekenhuis in Spijkenisse, as well as Van Straten Medical, the manufacturer and supplier of surgical instruments and disposals in De Meern, contributed to the first shipment to Ethiopia under Project Lazarus. The instruments transported had a total value of €237,000 if they had to be purchased new.

Jan Koning said RAF estimated that the 90 hospitals in the Netherlands the foundation believed could potentially participate in Project Lazarus had approximately six million medical instruments inhouse and if only 1% of these could be released for use in Ethiopia then they would have a value of between EUR 1.0 – EUR 2.0 million. RAF also buys sophisticated medical equipment for its Ethiopian centres of excellence including ultrasound machines (USD 40,000 each), GI endoscopy (USD 110,000) and endoscoptic third ventriculostomy (USD 50,000) kits.

Professor Maarten van der Elst, from the Reinier de Graaf Gasthuis in Delft, said: As a large hospital in the west of the Netherlands at least 10 % of our instruments are replaced yearly. A lot of this equipment can function as new with a little attention and proper maintenance, but with the changes in the regulations this recycling is becoming more difficult than directly buying new and expensive replacements. We are very happy to be supporting the Reach Another Foundation in helping medical centres in Ethiopia with these instruments through Project Lazarus, because with some careful handling they can be put to good use again and we also avoid needless waste in the environment.”

The WHO’s Global Surgery (SALTS) project has calculated that in low – and middle – income countries nine out of ten people cannot access even the most basic surgical services. Improving access to surgical care is essential, since surgery can successfully treat a wide variety of conditions.

In Ethiopia five million surgical procedures a year should be performed to achieve a basic level of care, but only around 700,000 procedures are being performed. That means 4.3 million people do not get the treatment they need and can die from causes such as internal haemorrhage, which could be controlled, or are unable to work and fall deeper into poverty due to infections in fractures. Mothers die of obstructed labour because they cannot get a Cesarean section and children with spina bifida within five years from birth if not treated, while in Western countries they would be able to live a normal life.

Marinus Koning concluded: “There is a tremendous humanitarian and economic need in Ethiopia and other developing countries, which can to a great extent be relieved by strengthening small local hospitals on the ground with fast and simple initiatives, such as we are doing in recycling medical instruments through Project Lazarus. The Reach Another Foundation would warmly welcome more hospitals in the Netherlands, and other countries such as Germany and the U.S., stepping in to support the scheme, or for more donors to help with financing the costs involved.” 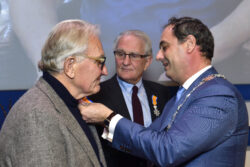 Photo: Jan and Dick Koning received a Dutch knighthoods for the work they do with their foundation in Ethiopia. Photocredit: Saskia Berdenis van Berlekom