The Dutch media descended on Amsterdam’s Borneo Island neighbourhood in early April, following Bellier’s invitation to hear the story of Otje the ‘saved swan’ and the jazz musician that has fixated the residents of the city’s old eastern harbour district.

Borneo Island was the location of Bellier’s first office in Amsterdam when the company was established in 2005. The waterside neighbourhood is also the home of Manon Geuskens (pen name: Manon Gerardine) who is the author and designer of the beautifully illustrated children’s book that brought the Otje story to life.

The children’s book on Otje (in Dutch) is available to purchase online through: www.goldview.nl

Below is the English translation of the article on Otje in de Telegraaf, the largest circulation Dutch newspaper.

Amsterdam neigbourhood is crazy about Otje
A swan called Otje that was born in June last year has become the star of a moving real-life story that takes place on Borneo Island in Amsterdam.

The entire neighbourhood has been captivated by the young swan that was rescued from drowning and adopted by saxophonist Arthur Heuwekemeijer and his wife Mariska. Yesterday, a book about his young life was presented in café De Oceaan, the living room of the neighborhood.

Did I see a swan on his lap?
Last summer, author Manon Gerardine was taken completely by surprise when she saw Heuwekemeijer sail past in his yellow canoe in the Dutch capital. “Did I just see somebody sitting there with a swan on his lap? I immediately wanted to find out more. I spoke to the man and he said that the swan was called Otje. He had already been living with Arthur and Mariska for a few weeks on their houseboat on the Borneokade. They had saved the swan when the father tried to drown it. How heartbreaking! Otje had come into the world a little later than his siblings and was not accepted. In the book I let the little swan say, ‘Daddy, Mummy, why don’t you love me?’ Arthur and Mariska couldn’t deal with the father’s aggressiveness and adopted the young swan.”

Since then Otje has been living on Arthur and Mariska’s houseboat. He dines with the family and eats vanilla custard and pasta. The swan sleeps on the sheepskin where the cat also sleeps. He steps under the shower when Mariska is having a shower. The musician has taught the swan to swim. “He copies Arthur when he dives into the water or swims backwards. It’s incredible,” says Gerardine, who has been working as a graphic designer and writer of children’s books for many years. “His feathers are all over the boat and Otje also poohs on board. That boat has become one big swan sty. The bond between Otje and Arthur and Mariska has become so strong that they even cuddle the swan.”

But the parents remain a danger. Otje’s two parents returned to the neighborhood last month and have built a new nest on the Panamakade – as the crow flies two hundred meters from Arthur and Mariska’s houseboat. Manon has a view from her apartment of the green houseboat, alongside which Otje’s parents live these days. They do not tolerate other swans in the neighborhood. “A few weeks ago, Otje was again attacked by his father while his mother looked on,” says Gerardine. “Otje was seriously injured. One toe had to be amputated and his wings are now infected.”

Otje is now recovering in the wheelhouse and the area around Arthur and Mariska’s houseboat has been fenced off with chicken wire as there is a danger that the parents’ territorial behaviour is so strong that they will keep coming back.

A few weeks ago, a whatsapp group was therefore created in which half the neighborhood participates to issue a warning whenever Otje’s parents go for a swim. Arthur then hops into his canoe to keep the parents at bay.

Caption:
Otje the Swan is all ears as his rescuer Arthur reads the book about his real-life story. Otje is now one of the family. He sleeps with the cat, goes for rides in the canoe and lets himself be cuddled. 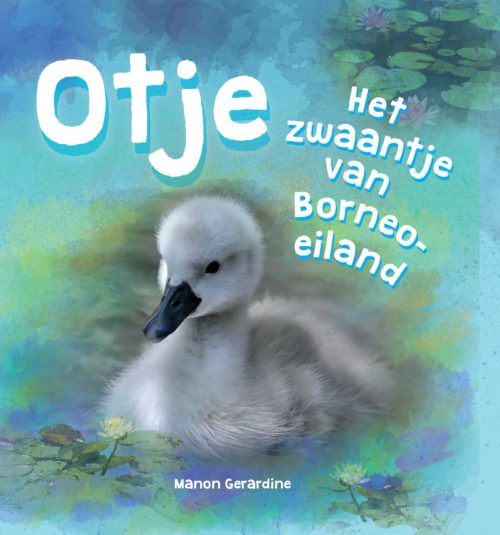