Real estate investment transactions in Germany hit a record of €76 billion in 2019, with the final quarter of the year recording the highest volume of quarterly deals ever done in any market in Europe, global data provider Real Capital Analytics’ European Capital Trends 2019 research shows.

Tom Leahy, RCA’s Senior Director of EMEA Analytics, said: “German real estate pulled in record levels of capital last year as it remains an attractive alternative asset class compared with many fixed-income securities. On the occupier side, the services sector of the economy is doing well, supporting the take-up of office space, and the investment market for apartments held up very well, despite a deteriorating macroeconomic outlook in Germany.”

More than €13 billion was spent on German offices in the fourth quarter of which €3.0 billion was in Munich; €2.8 billion in Frankfurt and €2.1 billion in Berlin. Average central business district office yields in these cities continued to fall over the year and are at record lows.

Despite the residential rent controls imposed in the second half of 2019 in Berlin, more than €1.0 billion of apartments traded in the last three months of the year. The RCA Hedonic Series shows pricing for Berlin apartment properties may have peaked and the value per unit edged down 2.5% over the year. In contrast, the city’s office pricing goes from strength to strength with average values increasing 13% year-on-year in 2019.

Germany was the biggest real estate investment destination for cross-border capital flows from European players in 2019 as it was in 2018. The top trade route was UK money moving into Germany and €3.0 billion was spent from this source last year.

The Top Buyers in the German market in 2019 were:
1. Commerz Real
2. Union Investment
3. Blackstone

The largest deals (single assets only) in the German market in 2019 were:
1. Die Macherei office in Munich – acquired by Universal on behalf of BVK for €630 million
2. Die Welle office in Frankfurt – acquired by Invesco for €620 million 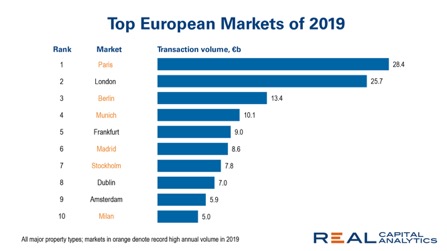 Real Capital Analytics (RCA) is the authority on the deals, players and trends that drive the commercial real estate investment markets. Covering all markets globally, RCA delivers timely and reliable data with unique insight into market participants, pricing and capital flows. The most active investors, lenders and advisors depend on RCA’s market intelligence to formulate strategy and to source, underwrite and execute deals. An industry pioneer since 2000, RCA has offices in New York, San Jose, London and Singapore. For more information, visit rcanalytics.com.